Electronica is the leading exhibition in Europe for electronic components, displays and embedded systems. At the booth area of 100 m2 about 40 different displays have been shown, covering the field of industrial and automotive displays as well as displays utilizing new technologies.

Displays with wide viewing angle and high resolution have always been one of the strong points from NLT and TIANMA.

The display shown here allow readability even under strong sunlight. From Tianma brand a 10.1” WXGA high luminance panel using SFT technology with 1000 cd/m2 was shown, the highlight from NLT brand was the new 15.0” XGA TN panel with the amazing luminance of 1600 cd/m2..

TIANMA NLT supports a wide range of touch technologies, including PCAP, on-cell and in-cell touch. Touch displays in sizes from 7” to 15” were presented. The major attraction points at the booth were:

Most on-cell touch panels are focusing on 7“ or smaller. Tianma is showing a display with a size of 10.1” and on-cell touch. It’s possible due to usage of optimized pattern design. It allows 10 touch points and it’s also working with water drops on the surface or if it’s operated wearing thin gloves.

This is one of the absolute highlights at the booth.

It’s based on a display with in-cell touch from Tianma. Pressure sensing is integrated into a single chip. This chip includes now display driver IC, touch driver IC, pressure sensing. It can distinguish between soft and strong pressure (“z-axis” sensitivity added).

According to the strength of pressure different functions can be started.

NLT’s new generation of PCAP touch displays allows touch recognition even if the surface is wet or when the operator is wearing gloves up to a thickness of 6 mm. Two displays, 12.1” XGA, optimized for operation with gloves respectively under wet surface conditions, have attracted the attention of many visitors.

NLT’s technology study shows a 10.4” touch panel which is able to provide tactile feedback at any position of the display surface. The touch perception can be generated at a fixed positon or can move across the surface. The perception is ether “smooth” or “rough”. One can “feel buttons” – or the surface of a Turtle armor.

For certain applications displays with free form are desired. Cutting of round TFTs is much more difficult that cutting of rectangular products due to the need to cut the backlight structure design and proper alignment of TFT lines. Tianma could achieve contour cutting with an accuracy of 0.1mm, resulting in a smooth appearance of the final product. The 4” demo sample has a resolution of 960 x 960 pixels, wide viewing angle (SFT) and on-cell touch. Typical applications are smart home and, for smaller sizes, as wearable devices.

The major application of AM OLED displays is still within consumer market. Tianma was showing two samples with their astonishing properties:

At the exhibition shown with a product thickness of 0.3mm and bending radius of 20mm. It was one of major attraction points. It is expected that the bending radius can be reduced to 5mm or even below. 2 mm are technically reached in laboratory already.

Typical applications are tablet/smart phone with edge or wearable watch.

VR display technology is emerging in computer graphics, as a human-machine interface, human-computer interface, in artificial intelligence and many other frontier technologies.

In combination with 3D sound experience, smells, etc. it can create a complete virtual world around us.

One demonstrator had a LTPS display in combination with a PC, the other one was just a mobile phone with Tianma AM-OLED.

The strong points from LTPS are the high resolution (about 850 ppi), longer lifetime and better yield in production.

A 21.3” display with high resolution (1600 x 1200) was used as image source. By reflection from a large semi-transparent glass prism the impression of 3D image was created, allowing text and figures to move and rotate free in space. The target market is exhibition industry. At our booth it has been one of major attraction points.

Since Tianma has moved into the global automotive display market, it has developed many custom specific high quality panels. Some of the most remarkable new products were shown at the booth:

This display has a curved surface with capacitive multi finger touch. All components – LED backlight, TFT LCD and touch sensor – have curved surface. The touch sensor is optically bonded to the TFT. The TFT has wide viewing angle (SFT). The display allows new designs in the car and provides a many options for new functions.

Many visitors were coming to the booth and many customer meetings were taking place. The electronica has been a very successful exhibition.

PrevPreviousTIANMA INTRODUCING MANY NEW PRODUCTS AND TECHNOLOGIES AT SID’S DISPLAY WEEK
NextDEVELOPMENT OF A THIN AND LIGHTWEIGHT 15.0-INCH LCD MODULENext 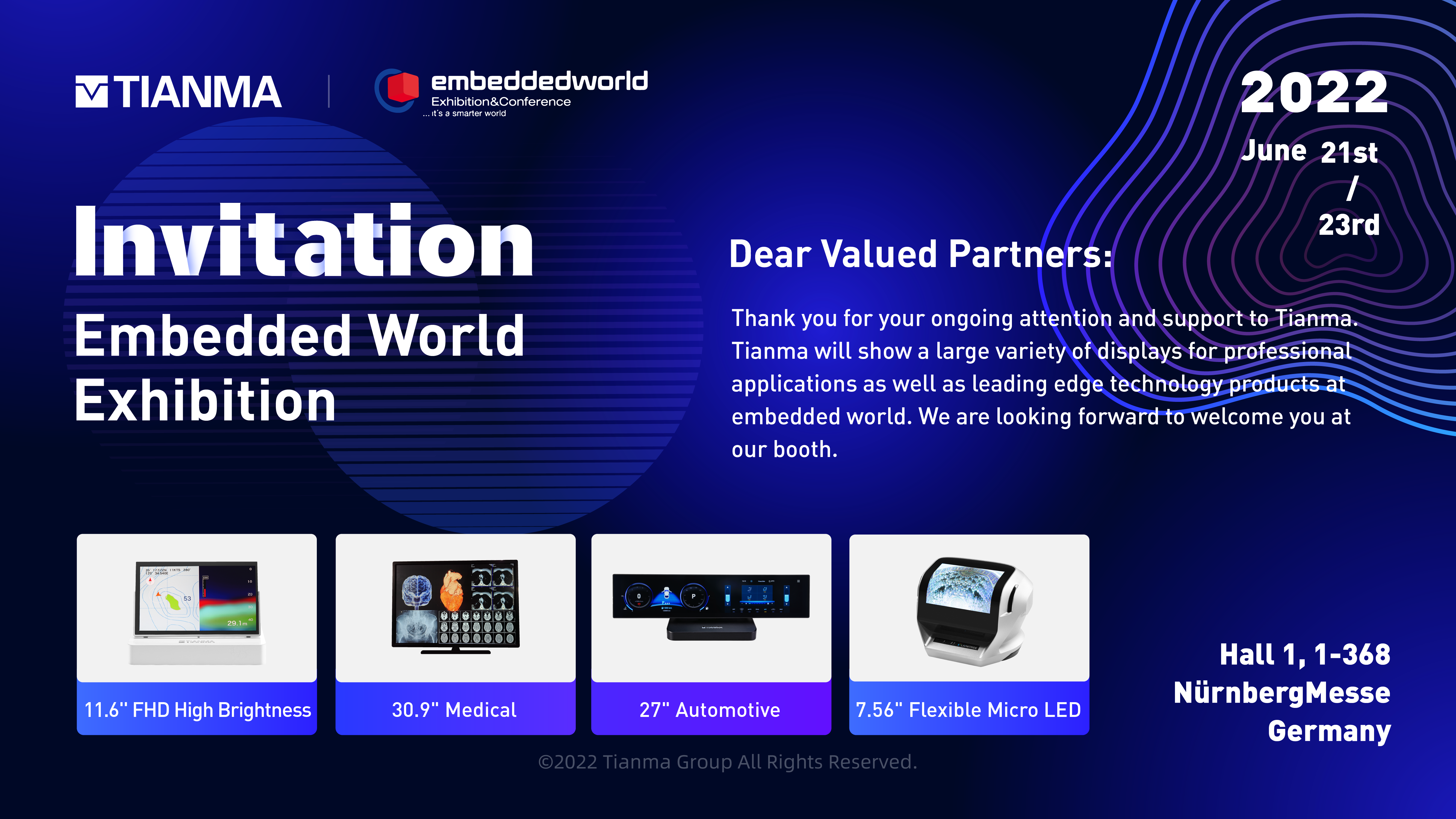